Today, our class went on an excursion and it was AWESOME! We visited the Flight Experience Centre in Perth, which is a place people can go to to use a flight simulator. It looked exactly like the cockpit of a Boeing 737, with lots of lights, buttons and dials! We all got a chance to pilot the plane, guided by a real life pilot, Captain Chris. Some of us flew over London and saw the Eye and Big Ben and the rest of us flew over New York and saw the Statue of Liberty. It was great fun! While each group waited for our turn in the cockpit, Captain Cait showed us some videos about how planes fly and about all the things airline staff need to do after a plane lands to make it ready to take off again. Tomorrow, we'll be writing about our day, so we'll add more information then. For now, check out this Animoto and other pictures!


A big thankyou to Nikolas' mum, who came along to help and to Mr F, our principal, who drove the bus! 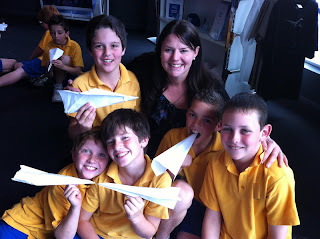 Love from The Smarties and Mrs G
Posted by THE SMARTIES at 9:46 PM 5 comments: 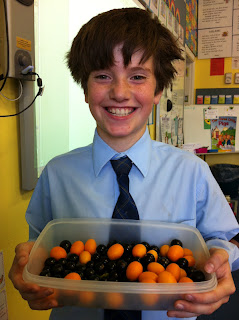 Every Monday in our class, we have Monday Munchies and it’s one of our favourite times of the week! Mrs G brings a fruit or vegetable for us to taste. Some of the things  we have tried are kiwi fruit, broccolini, snow pea shoots, kiwi berries, dragonfruit, rockmelon, persimmon, coconut, tangelos and cauliflower. Mrs G is always so proud of us, because we ALL try everything, even if we’ve had it before and didn’t like it. We know that sometimes we can try a food and not like it (perhaps because it wasn’t quite ripe), however, it’s always a good idea to try it again another time, because we just might find we love it!

Brock decided that he would give Mrs G a break this week and he brought in not one, but TWO Monday Munchies for us to try.  You can see them in the picture above. The orange things are kumquats, which are tiny citrus fruits. You can eat them raw, including the skin, and they’re quite popular for making jams and marmalades.  The other fruit that Brock brought in was something he picked off a tree at his uncle’s house on the weekend. They are Brazilian Grapes. He took a photo to show us the unusual way they grow. They grow right out of the trunk and branches! We’re used to seeing fruit on the end of branches, where the little twigs and leaves are, but these ones don’t grow like that!  Thanks Brock for bringing in such interesting fruits for us to try this week. 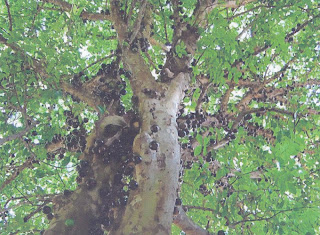 Love from The Smarties and Mrs G
Posted by THE SMARTIES at 7:22 PM 3 comments:


The Wright Brothers are famous for creating the first human controlled aeroplane. Today, we watched a video of their very first flight on December 17th, 1903. We can't imagine a world without aeroplanes, but back then, people travelled by ship if they had to travel long distances over oceans. Wilbur and Orville Wright changed the world forever! We have started researching the Wright Brothers so that we can create timelines of their lives and achievements.

Today, Mark brought in a fantastic book full of facts about flight. Mrs G decided to use it for a lesson today. We were each given a page of information from the book and we had to read it and identify any words we didn't know the meaning of. We looked them up in dictionaries and learned all sorts of new vocabulary!

One of our favourite parts of the day is Daily 5. We love having choices about how we spend our literacy time and our reading has really improved this year! Mrs G took some pictures of us during Daily 5.

We are very excited because we're going on an excursion next Tuesday! We're going to a flight simulator and will all get a chance to sit in the pilot's seat and control a virtual Boeing 737. We can't wait!

Love from The Smarties and Mrs G

We had a little break from blogging because we have been SO busy! The final weeks of last term were action-packed with an assembly and our very special First Holy Communion celebration. We have also just had two weeks holiday from school and have all come back relaxed and refreshed (especially Mrs G!).

This term, we're learning about flight. Today, we looked at pictures of a lot of things that fly and were asked to classify them any way we wanted. Mrs G was very impressed with our ideas. We thought of a few that she hadn't thought of! We sorted them into categories such as:

This term we are extra lucky. Miss F is a student teacher and will be in our class all term! We also have Miss   K who will be teaching us every Wednesday while Mrs G does work in the office. We are looking forward to the extra fun we'll have with our new teachers and can't wait to learn lots of new things with them!


Love from The Smarties and Mrs G
Posted by THE SMARTIES at 10:50 PM 4 comments:

We tried a very familiar vegetable during Monday Munchies last week, except it was a different colour! We ate purple carrots and they tasted just like orange ones! Carrots originated around 5,000 years ago in the area where Afghanistan and Iran are now and they were originally purple. Farmers only began cultivating orange coloured carrots around 1,000 years ago. 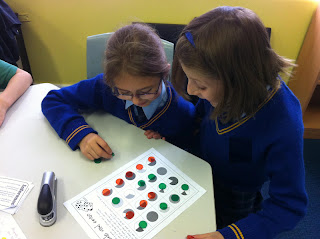 We have been very busy in Maths learning all about fractions. We've completed lots of activities and played lots of fun games to practise our skills. One of our favourite activities was calculating the fractions of pink and white marshmallows in little plastic bags. We also enjoyed working out the fraction of vowels and consonants in words!

Last week, Mrs G went to watch some of the girls in our class play netball. This is a really popular sport in Australia, especially among girls. It's a little bit like basketball, but you can't dribble the ball, the hoop doesn't have a backboard and you can't move your feet if you're holding the ball! It can be really challenging, but it's also heaps of fun. Mrs G used to play it when she was in school too! 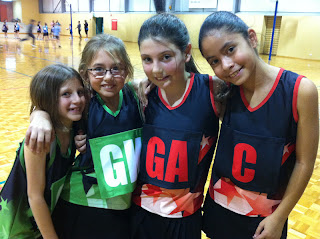 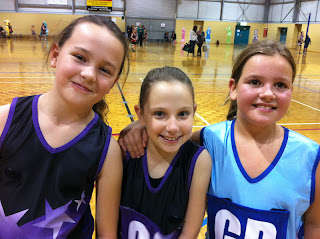 Mrs G also went to watch the other football team play. She was feeling tired just watching all the running the boys were doing during the game! 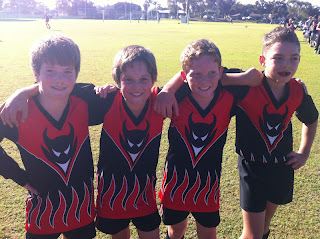 Love from The Smarties and Mrs G
Posted by THE SMARTIES at 9:26 PM 4 comments: 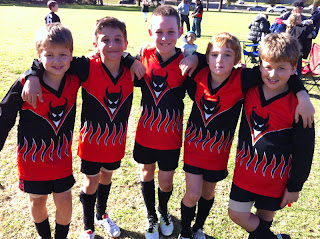 The boys in our class LOVE to play footy! Many of them are in teams that play on weekends. This morning, Mrs G went to watch one of the teams play and was very impressed with their skills! She saw lots of marking, kicking, handballing and running, as well as some great sportsmanship. Great job Ryan, Kaiden, Joel, Jye and Adam!

We have an assembly coming up later this term. Our theme is going to be "Reading" and we'll be singing two songs about books. We have started creating some art to be displayed behind us while we're singing and dancing. We painted self portraits, then chose one of our favourite books. Mrs G photocopied the covers and we glued them to our portraits with cut-outs of our hands to make it look like we were holding the books. We think they look really cool! We really do love reading in our class, especially during Daily 5 time, when we get to make choices about what we read and where we read it.

This morning, all of our Pre-Primary to Year 4 students gathered in the library to participate in National Simultaneous Story Time. We listened to the story through the interactive iPad app, projected onto the Smartboard. It was a really funny story about a very cranky bear and how some other animals made him less cranky. 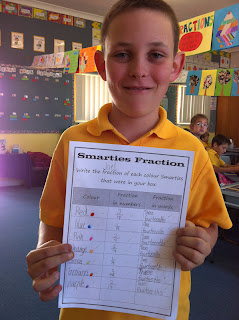 We did some more work on fractions today. This time we used chocolate! We were each given a little box of Smarties, which we had to count. This number would be the denominator.We sorted our Smarties into colours, then recorded each fraction on our sheet. We needed to write it in numbers and in words. For example, if we had 4 pink Smarties in a box that had a total of 12 in it, we would write it as 4/12, which is four twelfths. It was a very delicious Maths task!

Love from The Smarties and Mrs G
Posted by THE SMARTIES at 3:10 PM 3 comments: